And the Lord God formed man of the dust of the ground.

Literally, dust from the ground.

Terracotta (”baked earth”) is one of the earliest forms of expression in the history of civilization. Used as burial offerings, votive statuettes, 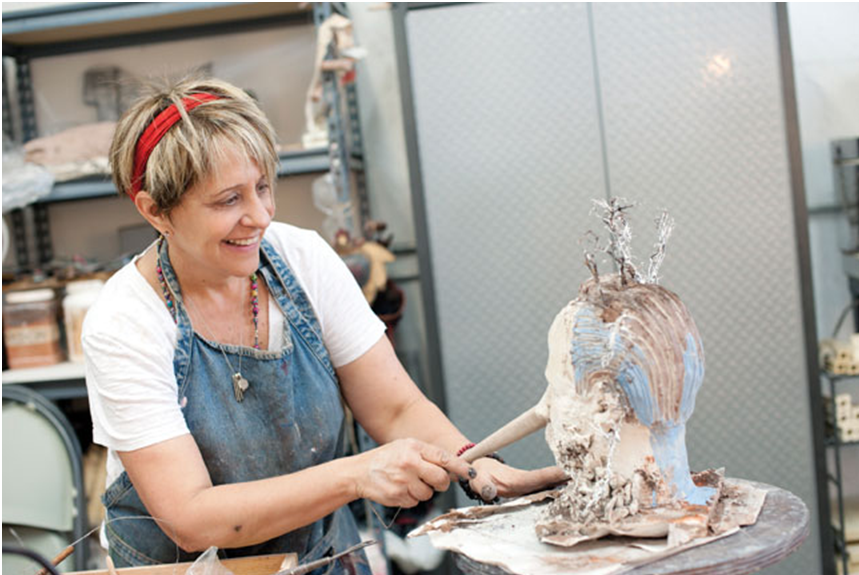 architectural elements, toys, domestic ornaments or just utilitarian objects, clay has been at the core of human life since time immemorial. Widely used in ancient art (China, Greece, Mesopotamia, Egypt, Mesoamerica and West Africa, among others), the art of terracotta always reflects a very specific, intimate relationship between material and creator. The intrinsic flexibility of the clay along with its exclusion from the tendentious “noble material” classification favor a much more spontaneous connection. “Mapping The Heart,” on view at CGAF Gallery, is an expression of it.

Born in Havana in 1955, Aimee Pérez’s childhood was populated by mythical passages of “campesinos” (peasants), fishermen, güijes1 and orishas. This vast spiritual universe become the core of her baggage when in 1967, at the age of 12, she left Cuba with her family and settled in Miami.

Since then, her inclination towards art, which until then had been a childhood passion, became a sort of catharsis and, above all, the ideal way to express her inner psyche and thoughts and reconnect with others.

“Mastering the art of clay has been essential for me,” Pérez said. “I feel drawn to an intimate relationship with the art because my pieces are directly connected to my life. They are the result of my own displacement experience and of being a woman, and they are somehow an incarnation of my grandmother, my mother and my own life experience. My work uses various types of clays fired at high or low temperatures and surfaced with oxide washes, slips, terra sigillata, engobes and glazes.”

Her direct, hands-on experience with renowned Mexican sculptor José Sacal, who introduced her to clay work using the 3D technique in 1997, was essential to her development. Her residence in Mexico (1989-1998) meant also for the artist the discovery of the Olmec culture, and specifically the Olmec figurines mainly made in terracotta.

Pérez’s body of work can be followed by tracking her main series of works, including “Figureheads,” “Origins” and “Raku.”

The “Figureheads” series (Orisha, 2012) and(Ibeyies, 2013) allows the artist to explore the human psyche. Using a natural scale and focused on facial expressions, these compelling pieces foster a very intimate personal dialogue between the public and the artwork. Meanwhile, her “Origins” series (The Others,2014) and (The Theater of Life, 2015),most often conceived as group compositions, is directly linked to the artist’s favored archetypes and paradoxical truisms.

The “Raku” series takes its name from the well-known technique that in Japanese means “enjoyment,” incorporating the accidents of the complex baking method into the creation process. Aimee’s “Raku” pieces (Taking a Look at Myself, 2012) and (The Bank, 2015) are powerful and charming, sharing an inner mystery and touching delicacy.

Following her deep dives into the inner self and confidence of the intimate relationship with one of mankind’s most ancient forms of expression, Pérez’s personal quest into her own soul becomes an open door through which we can study ourselves.

“Aimee Pérez: Mapping The Heart” is on view from Saturday, May 7th through June 1st. CGAF Gallery is located at 3015 Grand Ave, Coconut Grove, FL 33133.

Janet Batet is an art critic, essayist and curator based in Miami.